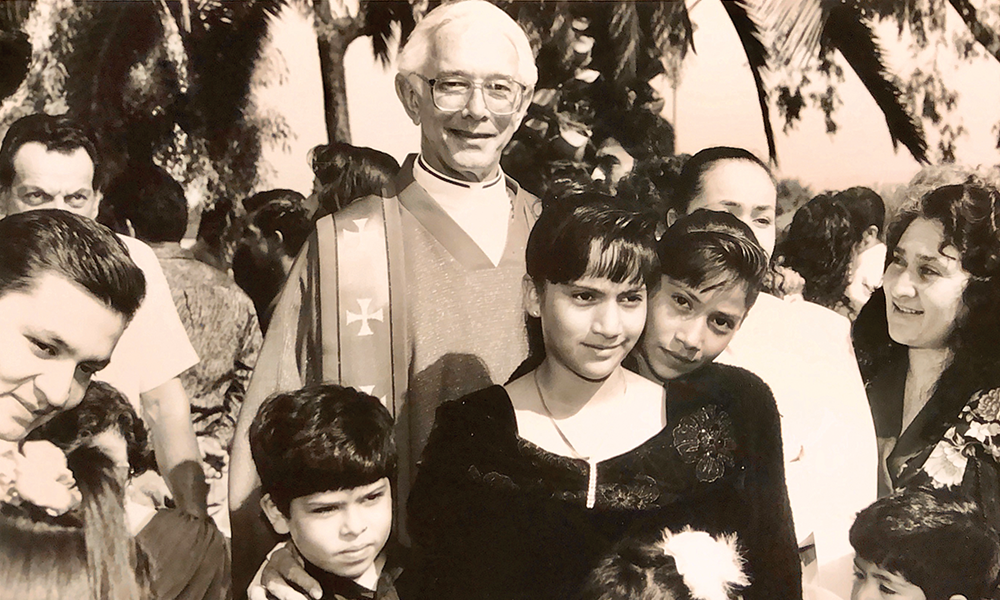 ‘To Keep the Family Together’

A Reflection on Bishop Pierre DuMaine, Founding Bishop of the Diocese of San José

I came to know Bishop Pierre DuMaine personally when he was superintendent of Catholic Schools, and I was director of catechetical ministry (CCD) for the Archdiocese of San Francisco. We often attended the same meetings; afterwards, we would often dine together at a cottage at Presentation Center in Los Gatos that the sisters let him use. He would cook us dinner — something he enjoyed doing and did very well.

During these dinners, we talked about anything but business. He would ask,“What are you reading?” He had very broad interests, and picked other people’s brains looking for other areas of interest. Most of the time, I found that he already had some knowledge of whatever topic I brought up because of his own vast reading.

During a news conference with the new bishop when the Diocese of San José was established in 1981, a reporter from a local Spanish language station asked Bishop DuMaine a question in Spanish. Without batting an eye, he answered in fluent Spanish — a gift I never knew he had. He later told me he learned it during a summer he spent in Spain.

In setting up the new Diocese of San José, he was asked several times what his plan was for the diocese. His simple answer was,“The documents of Vatican II.” The documents speak of the bishop and his relationship with the local clergy as fellow workers in the Lord’s vineyard. At the beginning, Bishop DuMaine asked that all the clergy of the diocese join him for the annual retreat and he served as retreat master, helping us all reflect on our common priesthood and our mission for the new diocese.

The Second Vatican Council promoted the importance of the gifts of all the baptized, not just the ordained. In choosing people to head various departments, Bishop DuMaine didn’t follow the custom of having a priest in charge of every important department. Instead, he chose religious and laity to head many of the departments. He even established an Office for Women in the Church to ensure that the gifts of women would be brought out and used in the diocese.

The documents of the council also emphasized the importance of the liturgy — how it should celebrate the unity of us all around the table of the Lord at the Eucharist. To promote this, Bishop DuMaine worked to have his cathedral located in the central downtown area of San José — at the original parish of the See City, St. Joseph Church. In renovating the church and elevating it to the status of a minor basilica, he had the altar relocated to the middle of the congregation so it would be the center of focus, and all present would be gathered around it.

When people asked Bishop DuMaine what he believed his role was as bishop, his simple response was, “To keep the family together.” He reached out to those who disagreed or were upset with him, invited them to his home, and made every effort to bring about a reconciliation.

Bishop DuMaine was a man of many talents and interests. To me, he was a good friend, and to all of us in the Diocese of San José, he was a gift as our first bishop.

Monsignor Terrence J. Sullivan served as vicar general for the Diocese of San José from 1985-92. He also served as pastor of the parishes of St. John Vianney and St. Lucy. He is now retired.