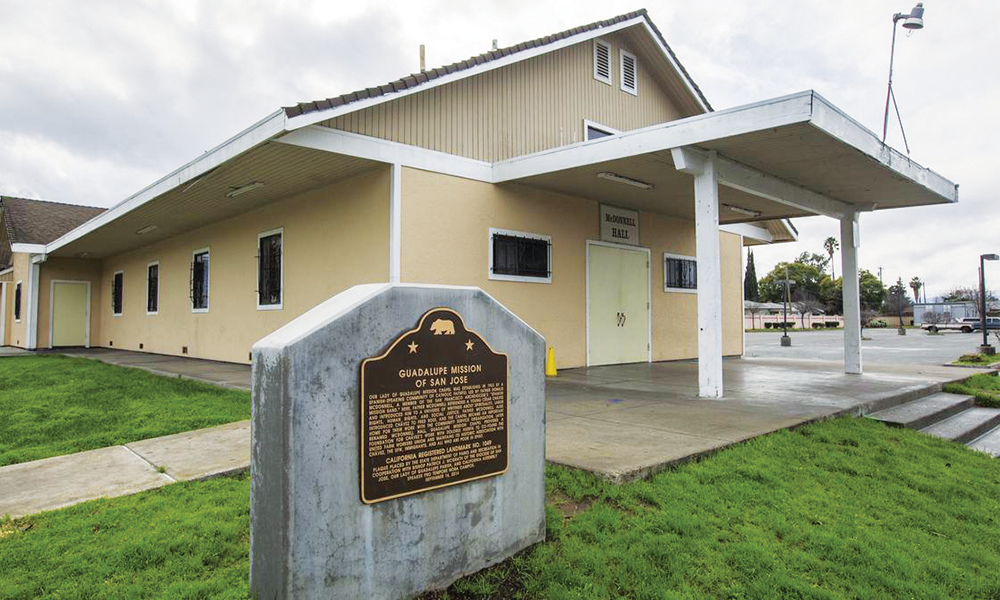 If These Buildings Could Talk:

A Brief History of Our Lady of Guadalupe Parish

THE ROOTS OF A COMMUNITY OF FAITH

In the 1940s, Mexicans began arriving to join Puerto Rican families in the Mayfair neighborhood of San José. At a time when there were virtually no Masses in Spanish in the entire valley, Mayfair Catholics gathered thousands of signatures to petition Archbishop John Joseph Mitty of San Francisco for their own parish. The effort bore fruit. In 1953, Father Donald McDonnell acquired from St. Martin of Tours Parish its original church building. Its relocation to Kammerer Street in Mayfair was accomplished mainly by parishioner volunteers. Mission Guadalupe quickly became a bustling hub not just of Latino socializing and culture, but of copious consumption of Menudo prepared by the Guadalupanas, members of the Mission community.

One of the original parishioners of Mission Guadalupe was a young man named César Chávez. With Father McDonnell’s instruction in Catholic social justice teaching and principles of nonviolent resistance, Chávez found his vocation as a community activist and would go on to lead the United Farm Workers Union.

In 1974, the building was moved again to its present-day location to become the parish hall. McDonnell Hall is now a National Historic Landmark.

Mission Guadalupe became the Franciscan Parish of Our Lady of Guadalupe (OLG) in 1961. Fathers Tony Soto and Rey Flores adapted and promoted the Cursillo movement not only as an experience of conversion to Christ but a seedbed of committed lay leaders.

In March 1968, Senator Robert Kennedy visited Mayfair and attended Mass at the parish. He would be assassinated in Los Angeles three months later. The first Mass in the new church on East San Antonio Street, built mostly by a volunteer construction force led by Cursillistas, was celebrated on Dec. 12, 1968.

A Bible study that Father Tony McGuire started at OLG in 1972 evolved into the first permanent diaconate program in the Archdiocese of San Francisco. Of those first 12 ordained, eight were from OLG.

Bishop Pierre DuMaine, the diocese’s first bishop, inaugurated the annual Diocesan Processions to a Prayer Vigil the Friday before the feast of Our Lady of Guadalupe. Each year, delegations from surrounding parishes are embraced by the OLG faithful in a flush of music, song, dance, and roses. Guadalupanas would see more than 11,000 devotees converge on Our Lady of Guadalupe annually prior to the COVID-19 pandemic.

A diocesan parish since 2011, OLG continues to be a place of solidarity and social justice. People Acting in Community Together (PACT), San Vicente de Paul, the Center for Employment Training (CET), credit unions, Cursillos, and a food program that serves more than 3,000 families a week are some of the initiatives that have started or thrived at OLG.

The buildings of Our Lady of Guadalupe stand as eloquent witnesses to a long history of believers who have organized and channeled their creative abilities, resources, and time to build something for everyone. It was mainly parishioners who put together Mission Guadalupe in 1953, built the present-day church in 1968 and who are continually maintaining and renovating the facilities. It is what the people of Our Lady of Guadalupe do.

Father Robert Brocato served most recently as a parochial vicar at Our Lady of Guadalupe Parish, where he is now retired and continues in active ministry.