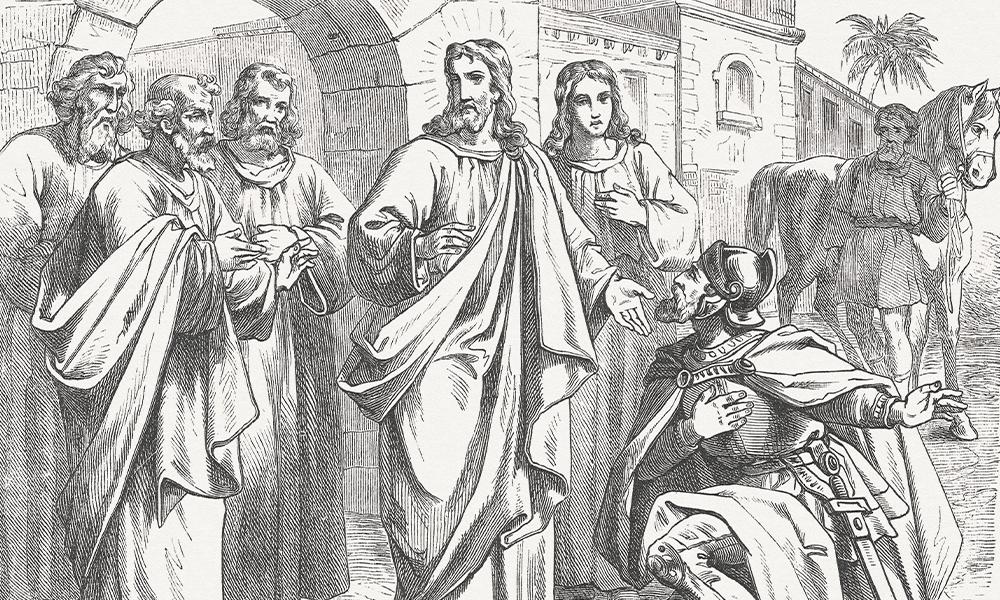 Who Were the Centurions Mentioned in the Gospels?

When he entered Capernaum, a centurion approached him and appealed to him, saying, “Lord, my servant is lying at home paralyzed, suffering dreadfully.” He said to him, “I will come and cure him.” The centurion said in reply, “Lord, I am not worthy to have you enter under my roof; only say the word and my servant will be healed. For I too am a person subject to authority, with soldiers subject to me. And I say to one, ‘Go,’ and he goes; and to another, ‘Come here,’ and he comes; and to my slave, ‘Do this,’ and he does it.”

When Jesus heard this, he was amazed and said to those following him, “Amen, I say to you, in no one in Israel have I found such faith … You may go; as you have believed, let it be done for you.” And at that very hour his servant was healed. (Mt 8:5-10, 13)

The words of the centurion in response to Jesus’ willingness to visit his home and cure his servant should sound familiar. They are the very words we echo at every Mass in response to the celebrant’s invitation to behold and receive the Lamb of God. The reason for this is clear. The centurion’s words amount to a powerful declaration of his faith in Jesus. It was a faith that Jesus acknowledged was unequal in all of Israel. It was a faith that directly led to the healing of the centurion’s servant and will lead to our own healing in the Eucharist when we are able to express these words with the centurion’s conviction.

Interestingly, this centurion was not Roman. He served in the army of Herod Antipas, whose army was most likely organized as a Roman auxiliary army. Of course, this is not the only centurion we encounter in the New Testament. For example, a centurion oversaw the execution of Jesus on the cross. Another centurion saved the apostle Paul from death at the hands of his Roman guards after a shipwreck. So, what do we know about centurions?

The rank of centurion

The Catholic Encyclopedia traces the tradition of centurion back to the beginning of the Roman army. In the eighth century B.C., it is said that Romulus, the legendary founder of Rome who killed his twin brother Remus, led 3,000 men and 30 centurions.

Each centurion commanded 100 soldiers, hence the name of the rank. Others argue the Roman army adopted the rank from an Etruscan king of Rome sometime between 579 and 534 B.C. It was a rank reserved for the bravest soldiers, as centurions were to lead their troops into battle from the front of the lines. Over time, the Roman army developed legions of 6,000 soldiers divided into 10 cohorts of six centuria (100 men), each of which was commanded by a centurion.

Centurions were also charged with training, assigning and disciplining their troops. They escorted prisoners and maintained supply lines. Centurions were apparently compensated fairly well. They had a right to a higher share of spoils and earned five to 15 times the pay of ordinary soldiers.

Not all centurions were created equal

Although the organization of the Roman army varied over time, by the first century B.C., a Roman legion consisted of 10 cohorts.  Each cohort had six 100-soldier centuriae. These six centuriae were formed into three pairs. Each pair was called a maniple.

The centurions were generally known for their courage in battle. However, centurions could be brutal disciplinarians, and there are accounts of their susceptibility to bribery and other forms of corruption. Nonetheless, the Gospels show centurions also witnessing to the truth of Jesus Christ and modeling faith for the Church. For even the centurion who supervised the crucifixion declared Jesus to be the Son of God:

“When the centurion who stood facing him saw how he breathed his last he said, ‘Truly this man was the Son of God!’” (Mk 15:39)

The insignia of the centurion rank was a vine branch staff. This staff doubled as a cane used by the centurion to punish his soldiers.

The first Gentile admitted into the Church during Peter’s inaugural mission to the Gentiles was a centurion of an Italian cohort (1/10th of a Roman legion). What was his name?