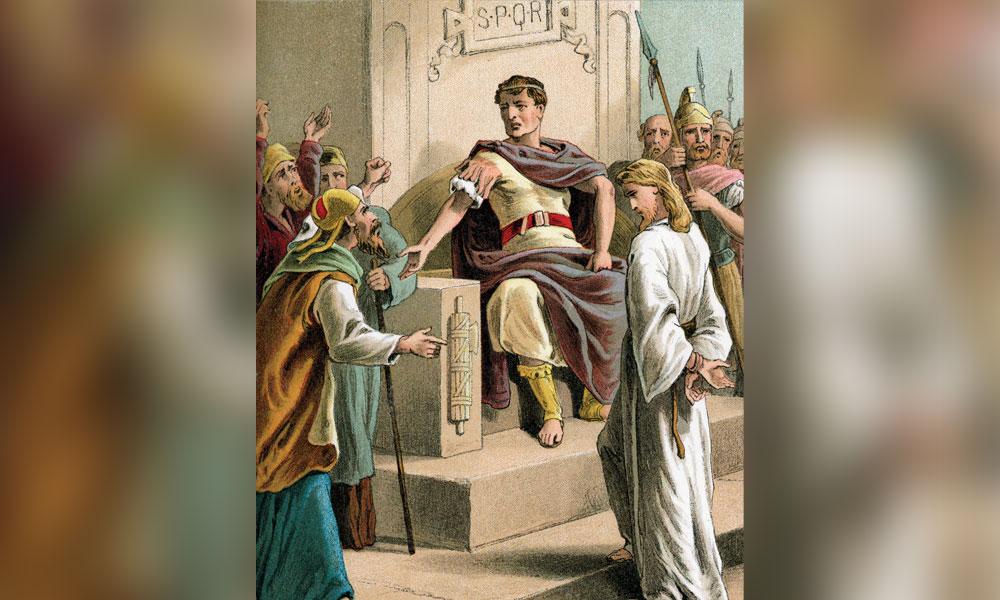 Who Was Pontius Pilate?

Theology 101 is taking a peek behind the scenes of some of the prominent figures, groups and events referenced in the New Testament. The goal is to provide a deeper context for the drama of salvation that Sacred Scripture communicates to us.

With this fateful question, Pontius Pilate concluded his interrogation of Jesus. According to the Gospel of John, Pilate reached the conclusion that Jesus was not guilty of a crime. However, he would leave it up to the crowd, who would choose to save Barabbas and condemn Jesus to death on the cross. So, what do we know about the person who presided over the crucifixion of Jesus Christ?

History tells us very little about the early life of Marcus Pontius Pilatus. The most common account of his life holds that he was a Roman knight of the Samnite clan. The Samnite clan was an ancient tribe from the mountains of southern Italy.

Pilate really does not appear on the scene until he is appointed the Roman prefect of Judaea by the emperor Tiberius in 26 A.D. A Roman prefect exercised the power of a supreme judge – meaning that the prefect alone had the authority to order a criminal’s execution. A prefect, or governor, also was responsible for tax collection, construction projects and maintaining law and order. Apparently, Pilate’s rise to such a post was the result of a direct intervention of a very influential friend.

Lucius Aelius Sejanus served as the chief administrator of the Roman Empire for Tiberius. As such, he enjoyed the complete confidence of the emperor and wielded substantial power. It was Sejanus who secured the prefect post for Pilate. Pilate would enjoy the protection of Sejanus for only a few years as prefect because Sejanus would die in 31 A.D. Sejanus was accused of murdering Tiberius’ only son and was implicated in a plot to overthrow Tiberius. He would be executed by the emperor and his body dragged through the streets to the cheers of the people and Senate.

Pontius Pilate’s reign as prefect of Judaea (26-36 A.D.) is described in different ways. For example, the New Testament shows a governor who is unsure and wavering. After all, he first declared Jesus to be innocent but then caved in to the crowd and executed him. In contrast, extra-biblical sources, such as Josephus and Tacitus, describe Pilate as a stubborn authoritarian who struggled with exercising constraint and intentionally stepped on Jewish traditions. As evidence for this position, they point to rioting by both Samaritans and Jews due to Pilate’s religious intolerance of both of their faith practices and traditions.

THE END OF PILATE

Josephus and Tacitus also state that Pilate was finally removed from his office and ordered back to Rome after he used excessive force to squelch a suspected Samaritan revolt. However, after this, he seems to have disappeared from history. Some traditions hold that he was executed by the emperor Caligula. Others contend he committed suicide at Caligula’s request. Still others point to early Christian authors such as Tertullian from the second century who claimed that Pilate actually converted to Christianity and evangelized the Emperor Tiberius.

While we may never know what exactly happened to Pilate, we do know he existed. In 1961, archaeologists discovered a carved stone with Pilate’s name and title in Latin in Caesarea. Then, in 2018, advanced photography revealed his name in Greek on a 2,000-year-old ring excavated from Herodium, the site of one of King Herod’s palaces.

Why is the priest wearing green vestments at this time of year?

The color green is used in liturgical vestments and decor during the Sundays of Ordinary Time, representing growth, life, hope, fidelity and immortality. Ordinary Time refers to the 33 or 34 weeks that fall in “order” between the seasons of Advent and Christmas and the seasons of Lent, Triduum and Easter. It begins with the Baptism of the Lord (following Epiphany and the Christmas season). Ordinary Time is suspended with the First Sunday of Lent and resumes after Pentecost.

The contention that Pilate and his wife converted to Christianity persists today. In fact, he and his wife are both venerated in many Eastern Churches. The Ethiopian Orthodox Church celebrates their feast day on June 25.

In the Gospel of Matthew, Pilate receives a message from his wife, after she had had a dream, warning him to have nothing to do with the death of Jesus, the “righteous man.” What was her name?