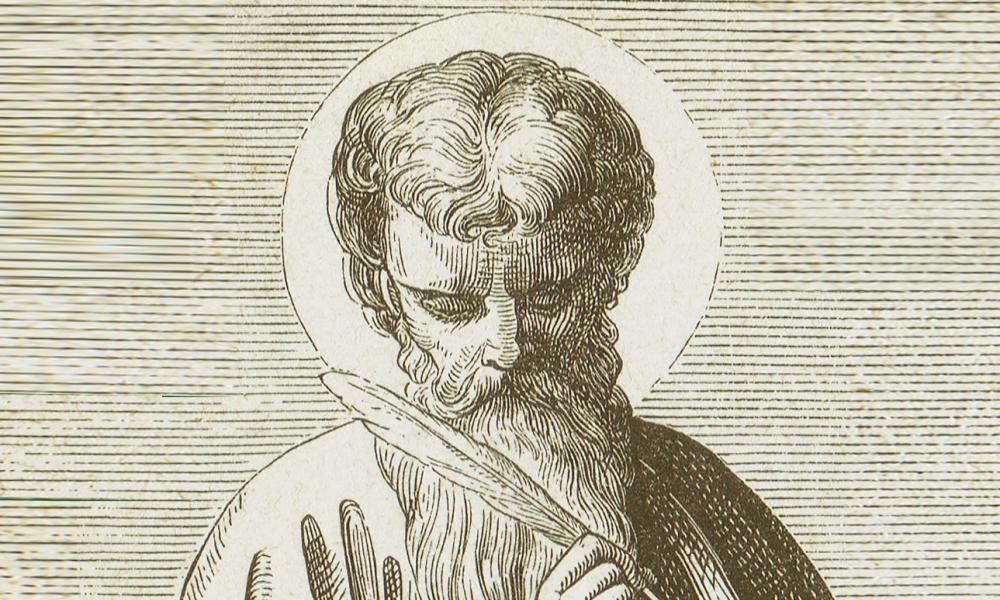 From Tax Collector to Apostle

In order to provide a deeper context for the drama of salvation that sacred Scripture communicates to us, Theology 101 is taking a closer look at the four evangelists. Read about St. Matthew below.

As Jesus passed on from there, he saw a man named Matthew sitting at the customs post. He said to him, “Follow me.” And he got up and followed him.

While he was at table in his house, many tax collectors and sinners came and sat with Jesus and his disciples. The Pharisees saw this and said to his disciples, “Why does your teacher eat with tax collectors and sinners?” He heard this and said, “Those who are well do not need a physician, but the sick do. Go and learn the meaning of the words, ‘I desire mercy, not sacrifice.’ I did not come to call the righteous but sinners.” (Mt 9:9-13)

The above passage is autobiographical in that it describes the author’s call to follow Jesus as an apostle. As we know, St. Matthew responded positively to Jesus’ call and became one of the Twelve Apostles and the author of the first synoptic Gospel. Let’s take a closer look at this interesting figure from Scripture.

From tax collector to apostle

The Gospel of Mark teaches us that Matthew’s name was originally Levi. Levi was identified as a Galilean and the son of Alphaeus. He was a tax collector and served Herod Antipas, the tetrarch of Galilee. This meant that Levi was not popular. The Romans forced the Jewish people to pay taxes. Tax collectors were known to cheat the people by charging more than required and pocketing the difference. As a Jewish tax collector, Levi would have been considered a traitor and unworthy to be chosen to follow Jesus by many Jews. Of course, once Levi accepts the call to follow Jesus, he is known as only Matthew, meaning “Yahweh’s gift.” For this reason, most believe Matthew was Levi’s Christian name.

Because he writes of Jerusalem and the temple in the present tense, many historians think he wrote his Gospel between 42 and 50 A.D. They point to the fact that the temple was not destroyed by the Romans until 70 A.D. to help make their point.

Matthew wrote his Gospel for Jewish followers of Jesus Christ. He composed the Gospel in Aramaic, the language of the Hebrew people at that time. He sought to convince his fellow Jews that Jesus was truly the Messiah whose kingdom had been fulfilled in a spiritual manner, a message that ran counter to most other messianic claims where the promised one wielded a sword.

Matthew took pains to explain how Jesus fulfills the teachings of the prophets in the Old Testament. He also shared the beatitudes to demonstrate the attitudes and actions required of followers of Christ. In this way, he offered a blueprint for the moral life of the believer.

His ministry and death

St. Irenaeus and St. Clement of Alexandria write that Matthew ministered in Judaea for some time after Jesus’ death and resurrection. He then traveled to the East, presumably to escape a persecution that began around 42 A.D. While there is some debate as to which countries were evangelized by Matthew, most ancient writers mention Ethiopia to the south of the Caspian Sea (not Ethiopia in Africa), Persia, and the kingdom of the Parthians, Macedonia and Syria. It is believed he established Christian communities in both Ethiopia and Persia. Tradition holds that he died a martyr. However, there is no record of his passing, so we do not know the details of his martyrdom.

Matthew is the patron saint of bankers, accountants, bookkeepers, stockbrokers, security guards and tax collectors. His feast day is Sept. 21.

God of mercy, you chose a tax collector, St. Matthew, to share the dignity of the Apostles. By his example and prayers, help us to follow Christ and remain faithful in your service. We ask this through our Lord Jesus Christ, your Son, who lives and reigns with you and the Holy Spirit, one God, forever and ever. Amen.

Matthew wrote the longest Gospel, with 28 chapters (Luke wrote 24; John, 21, and Mark, 16). His Gospel also reflects a low Christology, or an ascending Christology – it emphasizes Christ’s humanity, as opposed to the Gospel of John which emphasizes Christ’s divinity. Both approaches are necessary in order to understand the nature and work of Jesus.

St. Matthew the Evangelist is often portrayed as ....

A. A winged ox

Answer: B – An angel. The winged man, or angel, combines the natural and supernatural and thereby symbolizes St. Matthew’s stress on the human and divine nature of Jesus.