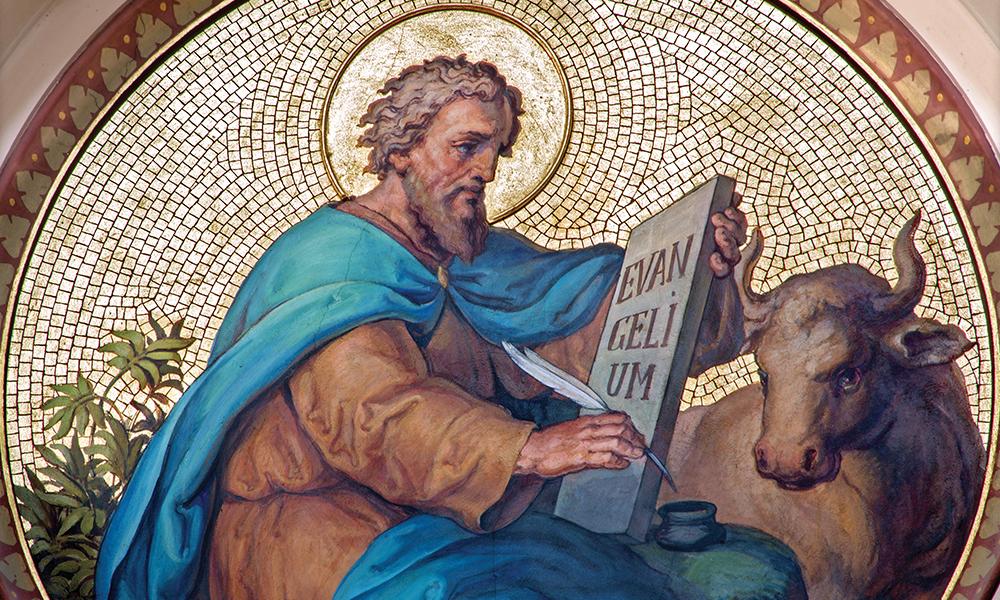 In order to provide a deeper context for the drama of salvation that sacred Scripture communicates to us, Theology 101 will take a closer look at the four evangelists, beginning with St. Luke.

St. Luke, or Luke the Evangelist, was the most prolific of the Gospel writers. Both the Gospel of Luke (the longest Gospel) and the Acts of the Apostles are attributed to his authorship. Although his Gospel is considered to be one of the synoptic Gospels due to its similarity to the Gospels of Matthew and Mark in describing the ministry, death and resurrection of Christ, its unique aspects reveal much about the man and the saving message of Jesus.

Similar, and yet unique

The Gospel of Luke shares much in common with the Gospels of Matthew and Mark. Many biblical scholars surmise the reason is that Luke utilized both as sources of his Gospel account. At the same time, there are several distinctive features to the Gospel of Luke that offer us a window into the author’s life. For example, Luke substitutes Greek names for the Aramaic or Hebrew names found in his sources, omits Jewish Christian concerns so prevalent in these same sources, devotes significant attention to Gentile Christians, and seems to lack familiarity with Palestinian geography, customs and practices. This suggests that Luke was a Gentile writing to other Gentile Christians. His incorporation of a prologue situates him squarely in the Hellenistic Greek literary tradition. In addition, he presents the Gospel story in a narrative form that acknowledges his dependence on eyewitnesses, indicating that he was not one himself.

Luke hailed from Antioch in Syria. As our opening passage notes, Luke was a physician by trade and, therefore, highly educated. Some scholars believe he received his medical training at a famous school in Tarsus. Though he was not an eyewitness to Jesus’ ministry, he did know the Apostles and other disciples. Most prominently, he was a companion to St. Paul, and accompanied the Apostle to the Gentiles on his missionary trips, standing by Paul through multiple imprisonments and his death. The Acts of the Apostles details these events, and Paul’s Letters affirm Luke’s place in the Apostle’s life and ministry.

We do not know much about St. Luke after the death of St. Paul. However, there is one reference to him in the ancient text, Prefatio vel Argumentum Lucae, which dates back to a Julius Africanus, born in AD 165. Julius Africanus is known as the father of Christian chronography, the description of characters and events chronologically. This text describes Luke as unmarried and the writer of the Gospel of Luke. It also states that he died when he was 74 in Boeotia in Greece.

St. Luke’s Gospel shows how God’s promises to Israel have been fulfilled in Jesus, and how the salvation promised to Israel has been extended to the Gentiles. It is, in essence, a historical account of salvation history, which is part of our history. Luke’s contribution to the life of the Church does not end there. The United States Conference of Catholic Bishops asserts that Luke calls the Christian disciple to identify with Jesus, who “is caring and tender toward the poor and lowly, the outcast, the sinner, and the afflicted, toward all those who recognize their dependence on God.”

In addition, the Gospel of Luke’s concern for the mercy and compassion of Jesus, the role of the Spirit and the demands of discipleship reflects the mind of a physician who shares the same goal of Christ – to heal what is broken.

Through the inspiration of the Spirit, St. Luke truly became a “doctor of the soul,” and his Gospel account offers each of us a prescription to become one too.

The Gospel of Luke was written to this person…

The symbol of St. Luke is the winged ox. This symbol, rooted in Ezekiel and later in the Book of Revelation, was first assigned to St. Luke by St. Irenaeus. It was later affirmed by St. Jerome, whose symbolic scheme of the four Gospel writers has prevailed over the centuries.

The ox is related to the sacrifices offered in the Temple, where St. Luke’s Gospel begins and ends. The symbol of the ox then links the Temple sacrifices to the sacrifice of Christ on the cross. The wings are thought to represent the call to spread the Gospel of Jesus Christ to the ends of the earth.