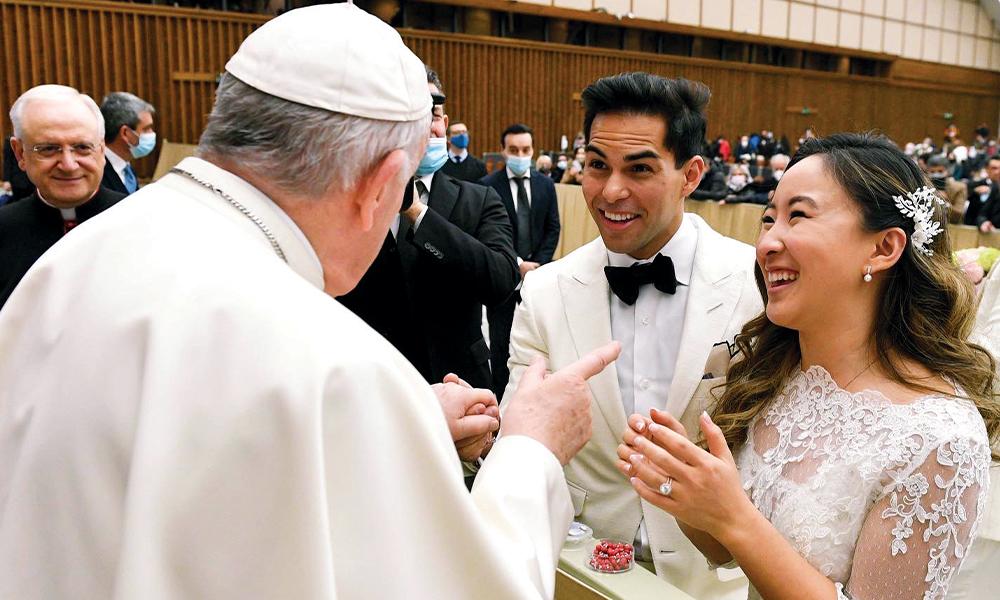 On September 25, 2021, Bishop Emeritus Patrick J McGrath presided over my nuptial mass to my husband, Christopher Castillo, at Stanford Memorial Church, with nine concelebrants from the Diocese of San José, Oakland, and San Francisco. A few months later, we visited Pope Francis for the sposi novelli blessing, where Pope Francis blesses couples married within the past two months after some Wednesday General Audiences at the Vatican.

Before Chris even proposed to me back in 2019, I had already researched how to receive tickets for the sposi novelli blessing because I was trying to convince my brother & sister-in-law to go as newlyweds. From there, I got in touch with the sisters at the Pontifical University in Rome, and that's how I was able to reserve tickets for December of 2021 after Chris and I got engaged.

I had a bit of experience traveling to Rome for the Pope's General Audience because my mom had taken my brother and me to visit St. John Paul II in 2000 for the Jubilee Pilgrimage when I was eight years old. At that time, the crowd was so packed that my mom put leashes on our wrists to keep track of us!

So, as I started planning our visit with Pope Francis, I made a plan with Chris to wake up at 4 am and stand in line at St. Peter's Basilica by 5:30, no later than 6 am. Chris might have thought I was crazy but he didn’t protest, and we stuck to the plan!

I thought the crowds and security lines would be just as I remembered, and I was 100% mistaken. The crowds were very small as it was freezing cold, and of course, COVID restrictions required strict testing protocols. We waited outside until around 7:30 am when the guards let us in, and we proceeded to sit in the first chair, in the first row, right in front of Pope Francis as he gave his general lecture.

After the audience, he visited with nearly 40 - 45 people before coming over to the sposi novelli line. When he came to see us, I had my talking points written in bullet points and started speaking to him in Spanish.

I’m Taiwanese, but I know some Spanish. My husband is a mix of Filipino and Mexican, but he doesn’t speak Spanish. The Holy Father was so shocked to hear me speak Spanish that he responded to Chris in Spanish. I had to say: “He doesn’t understand what you’re saying; I can speak Spanish, but he can’t!” The Pope was laughing about that, and he said to Chris, “But she’s Chinese! I was expecting her to speak Chinese. She’s pretty good!”

After that exchange where he was laughing with us, he gave us a short blessing and had to move on. I was a bit sad because I realized the bulk of our exchange was him laughing and being shocked at my ability to speak Spanish. I thought we would have a more profound talk, but we ran out of time so quickly!

Afterward, we walked away feeling incredibly blessed to be able to share our story more broadly. Reflecting on our brief exchange with Pope Francis, I think we were fortunate to have had a meaningful (albeit brief) exchange. We were the only couple with whom Pope Francis spoke. It was a profoundly human, funny, shocking, and significant interaction. We feel so blessed to have been in his presence and received a blessing from him!