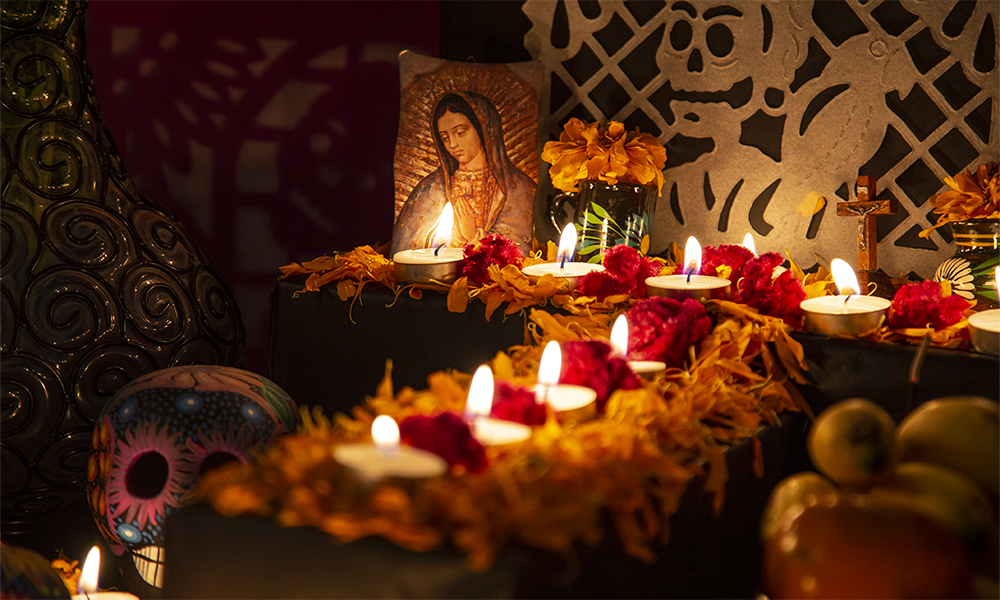 Halloween, All Saints' and All Souls' point to 'thin places'

As I head down the hill for my evening walk, a giant full moon looms ahead. A harvest moon, this being a Midwestern October. I say a prayer of gratitude.

Coming toward me, an excitable little dog strains at his leash to reach me, accompanied by a little girl and her dad.

As they retreat into the darkness, I hear a strange noise behind me in the encroaching twilight. It's only a large fall leaf, being blown down the pavement as if following me into the dusk.

We are in the Halloween season, and also the season of All Souls' and All Saints', so I am more aware of the presence of things not of this earth.

Down the street, orange and purple lights blink from houses, and a little bevy of ghosts surround an ornamental tree, their white gowns alive in the wind. 'Tis the season to think of other worlds, and the life that awaits us.

All Saints' Day has a long history in our church, possibly originating as early as A.D. 300 to commemorate the many early martyrs of the Christian faith.

All Souls' is more recent, but still hundreds of years old. It originated as a time of prayer for the dead, and today commemorates all the beloved who have gone before us into eternity. Many parishes invite members to bring pictures of their departed to church during November or to inscribe their names in a book.

Halloween? Well, that holiday has its origins with the pagan Celts, long before St. Patrick brought Christianity to the Irish.

But today, it falls on the eve of All Saints' Day, and despite its commercial and often kitschy aspects, I find it an earthy, colorful reminder of the Celtic concept of "thin places," those locales or moments where the veil between this world and the otherworld is porous.

Thin places are those times when, briefly, you encounter the sacred. All Saints', its Halloween eve, All Souls': They invite me to be present to something beyond this world's reality.

I am in the process of moving from my home of 10 years to a different part of the country. A move involves much letting go. Moving challenges me to embrace the Ignatian concept of indifference -- my too many clothes, these books I've collected, this house I love -- let go, let God lead the way.

Today, a favorite cousin came to reclaim some large, turn of the 20th-century portraits of our common great-grandparents. In a time when pictures were rare, these were obviously meant to leave an image for posterity.

My great-grandfather, a survivor of the Irish famine who came to Nebraska to farm in the late 19th century, has always felt close to me, his grave in a country cemetery for me a thin place. These large portraits have never hung in my house, and I have smaller copies. Nevertheless, it was hard to see them go.

He died in 1912, but when I was young, I knew an old man who knew him. He told me my great-grandfather could weave a good tale as he snuggled up to the bar in the little town near our farm, and I've always longed to hear his voice. In this season of thin places and letting go, maybe I can.

As my walk ends, and I round the corner toward my house, I encounter again the little dog and his minders heading home. The night has deepened, the world moving into a darker, colder season. I say another prayer of gratitude.