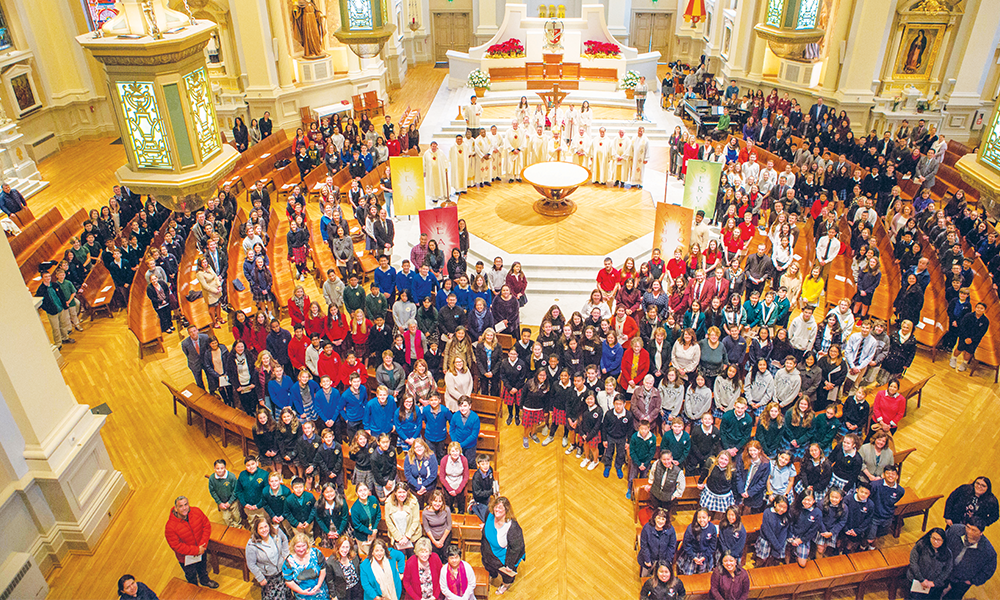 With the Gold Rush in 1849, the population of Santa Clara County grew rapidly, resulting in the need for both religious and educational institutions in the Santa Clara Valley. These needs could no longer be fulfilled solely by Mission Santa Clara.

In December 1850, recognizing the need for more schools, Bishop Joseph Sadoc Alemany of California offered the decrepit buildings of Mission Santa Clara to Father John Nobili, SJ, who had been attempting to open a Catholic school in California. In May 1851, after only a few weeks of preparations, Santa Clara College, the first college in California, began instructing students. Later that year, the Jesuit-run boys’ school Santa Clara Prep in San José (currently Bellarmine College Preparatory), was founded. During the same time, the Sisters of Notre Dame de Namur founded the all-girls Notre Dame High School.

In 1856, the sisters also established St. Mary School (later renamed St. Clare) to educate elementary-age students. St. Mary School in Gilroy was founded in 1870 by the Sisters of the Immaculate Heart of Mary. By the early 1900s, Catholic education was firmly established in Northern California, and it was largely because of numerous religious congregations who built a continuing legacy of Catholic education.

The population of Santa Clara County increased by more than 400,000 people from 1950 to 1970 due to the growth of electronics and technology research industries. As a result, the demand for Catholic schools increased, and two-dozen Catholic elementary schools opened in Santa Clara County during this period. In addition, several Catholic high schools were also established.

As the Diocese of San José was formed, the changing demographics of Santa Clara led to a shift in where schools were needed. Yet, the mission of Catholic schools — to educate students academically, emotionally, and spiritually — remained the same. Catholic schools have been a blessing for generations of students, many of whom were newly arrived immigrants with dreams and hopes for a better future, including Maira Gutierrez-Folchi, principal at St. Justin Catholic School in Santa Clara:

“As a first-generation Mexican American, attending a Catholic school was everything to me growing up. I not only learned how to speak English, but I also learned how to develop the most important relationship of my life, one with Jesus. My relationship with Jesus has guided me through all the big moments in my life — good and hard — including saying yes to being a Catholic school leader. As a student of color in a Catholic school, my reality was different than the reality of most of my classmates. I am grateful for my unique experience because it has shaped the kind of school leader and person that I am today. Through my Catholic school experience, my mission as a school leader is to provide all families who want a Catholic education with one no matter their socioeconomic status. I am committed to this because I strongly believe that through Catholic education, we make God’s will known on earth and provide students with opportunities to discover their call in life, and we are called to ensure everyone has a place at the table of God.”

Originally, children at Catholic schools were educated by men and women religious. Now, students are led by lay professional educators.

“Attending St. Clare and Archbishop Mitty (or Catholic school from kindergarten through high school) was instrumental in my formation to becoming a principal. The level of rigor and support I experienced as a child made an imprint on me about the value of belonging to a faith-based community and having strong academic foundations to carry me through life. Catholic education is a testament to what can be done when we honor the past and our faith traditions, and at the same time, continue to move forward in innovative new ways; always keeping student formation at the heart of all we do. This is why I feel honored to be a Catholic school principal and carry on the legacy of the Catholic school leaders who went before me.”

Today, we are proud that our Catholic schools continue to educate all students, including the newly arrived immigrant and the often-neglected students on the margins of society. The children we educate today will become tomorrow›s leaders for both our Church and for society.