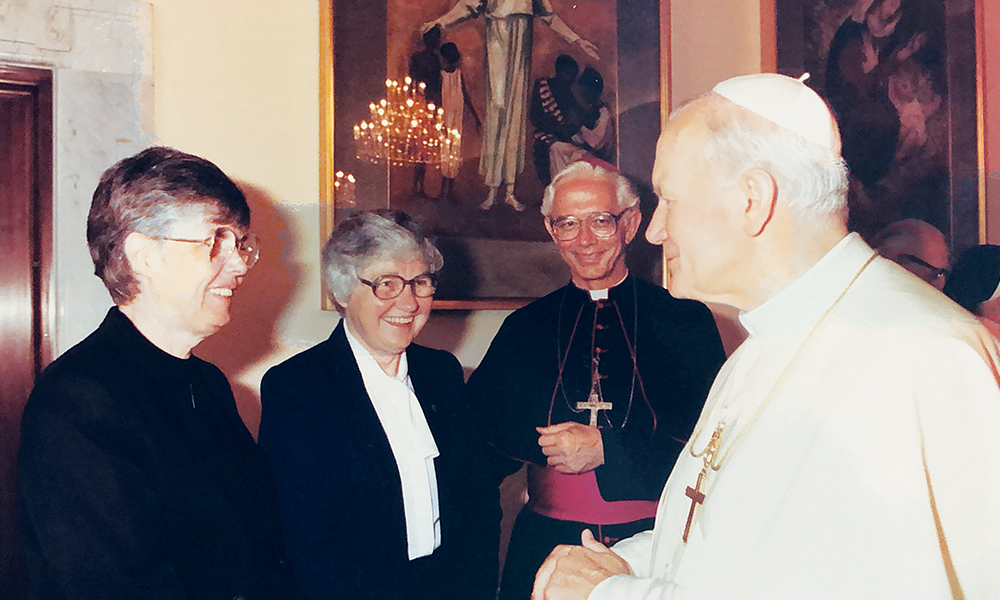 Daughter of the Church

For some, 40 years is a lifetime. For others, it may seem like only yesterday as we now gather to celebrate the 40th Anniversary of the founding of the Diocese of San José in this “Valley of Hearts Delight.” If one were to Google the names of those who did the groundwork establishing this new diocese, Sister Patricia Marie Mulpeters, PBVM would pop up early in the search results. And further, if it were possible for technology to create a celestial website, Sister Patricia Marie’s ID would be “Daughter of the Church,” her password, “Fidelity.”

Sister Patricia Marie was generous with her time and talent in helping to shape the local Church of San José. The possibilities were many as she assisted in setting up various offices designed to provide pastoral services for the faithful. Founding Bishop Pierre DuMaine appreciated her gifts. Her competency enabled him to see the potential that women could bring to the Church, and as a result, he appointed several as department heads. Sister Patricia Marie herself was one of the first women to be named chancellor, a position traditionally held by clergy.

Again, ahead of the times, an Office for Women in the Church was established to provide a viable channel for women to explore their role in the Church. Sister Patricia Marie, appointed as its vicar, invited Monsignor J. Patrick Browne to assist her in conducting a survey for this office. The data they gathered and analyzed proved instrumental in facilitating future planning.

When Sister Patricia Marie left the diocese, where she served as vicar of pastoral ministries, vicar for religious, and chancellor, she was not finished using the enormous gifts that she shared so generously in bringing to fruition a new diocese. Her next assignment was to become director of the Presentation Center in Los Gatos.

Sister Patricia Marie was a visionary. As director of the Presentation Center, a place of beauty, she realized that it was a natural classroom to educate visitors about the environment, the harm it is experiencing due to climate change, and the steps she firmly believed we are ethically called to take to preserve it. So in 2003, when the time came to design a new welcome center and dining facility, she donned her hard hat and ensured that the new building met the Leadership in Energy and Environmental Design standards set forth by the U.S. Green Building Council. Completed in 2005, the Welcome Center served as an example of sustainability, a tangible legacy of Sister Patricia Marie’s tenacity and commitment to environmental education and justice.

In recognition of her service to the Church, Sister Patricia Marie received the Cross Pro Ecclesia et Pontifice Award from St. John Paul II and an honorary doctoral degree from Santa Clara University. However, the one recognition she probably most prized was her call from God to make real and credible the message of the Gospel among the community of her sisters she loved and among the many friends who loved her. To the end, she was faithful as a true “Daughter of the Church.”

Sister Rosalie Pizzo, SNDdeN served as a pastoral associate at Saint Lucy Parish for 19 years and most recently as the Bishop’s Delegate to Religious in the Diocese before retiring in 2019.