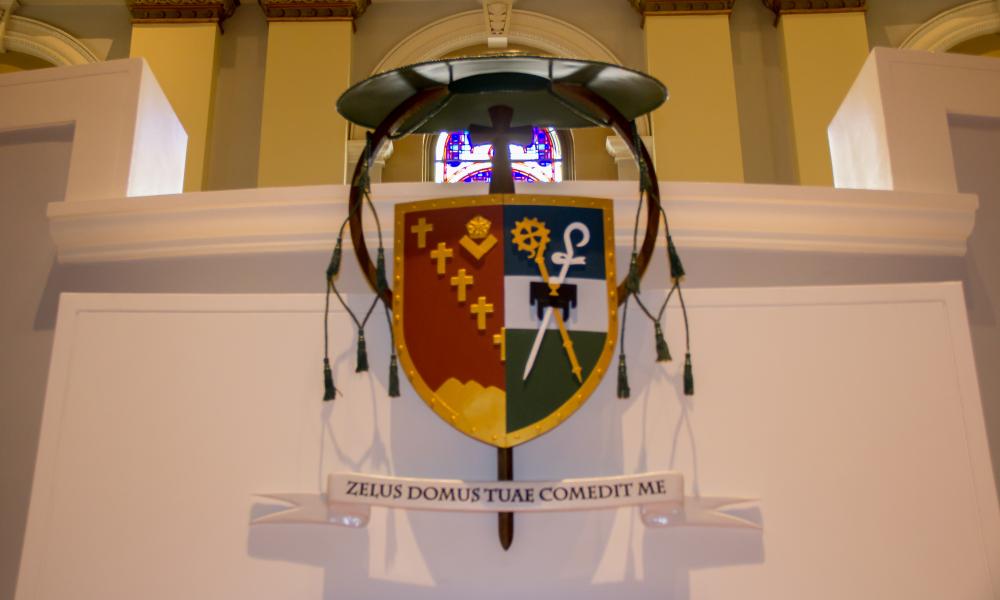 Coat of Arms of the Most Reverend Oscar Cantú, Bishop of San José

The coat of arms of a bishop is composed of the following: a shield with its symbols, referring to family, geographic, religious, and historical meanings, or the name of the Bishop; a golden processional cross, representing the rank of Bishop, behind the shield; a green hat, called a galero, with twelve (six on each side) tassels attached, in rows of one, two and three, from the top; and a scroll with the motto, written in black, located beneath the shield

For his personal coat of arms (right side), Bishop Cantú has adopted a design that reflects aspects of his life and his ministry as a priest. On a white field across the center of the design is a black table on which is displayed a gold chalice and white host, for the Eucharist, the central feature of priestly ministry. The Lord’s table and the family table are where we gather – in the Church and the domestic Church. They represent the two places where Bishop Cantú was formed as a person and a Christian.

The design is placed on a split field that is blue on top (representing his American citizenship and residence) and green on the bottom (representing his Mexican heritage, as a son of immigrants). On this split field are two crosiers: a gold bishop’s staff and a simple abbot’s veiled staff. These are to honor Saint Ansgar (also known as Saint Oscar, and thus Bishop Cantú’s patron saint), who was a Benedictine abbot before he was appointed Bishop of Hamburg, Germany. Abbots used a veiled crosier because in ancient days, when bishops wore gloves during the liturgy, abbots did not; and the veil was used to keep the abbot’s hands clean for worship.

Bishop Cantú chose as his episcopal motto the Latin words, Zelus domus tuae comedit me. This phrase, from Psalm 69, expresses the burning desire that motivates the bishop to work for the Kingdom of God: “Zeal for Your house consumes me.”