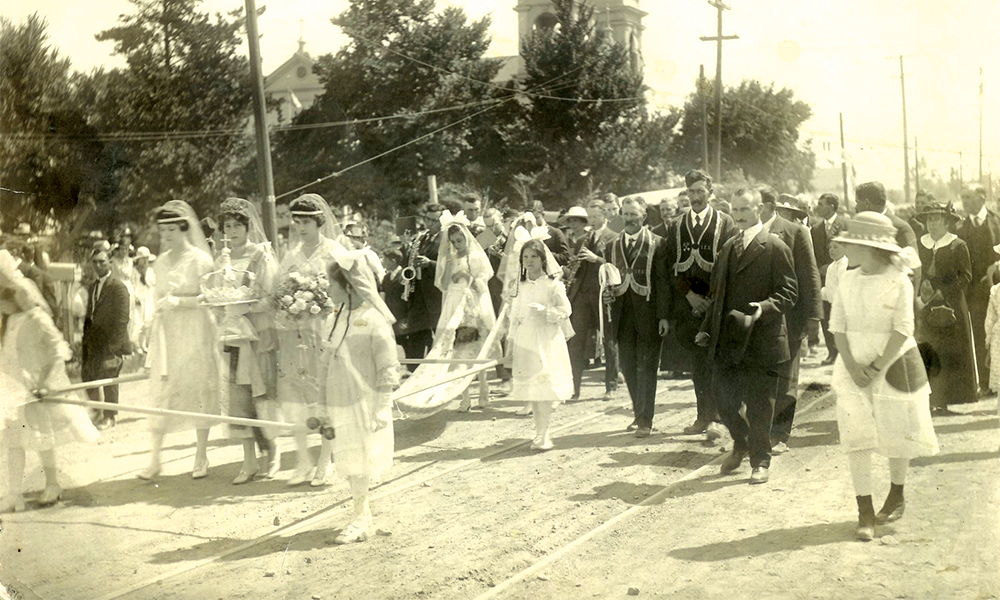 All Churches Were Closed Just Before Christmas

“Today, all churches were closed because of the influenza that continues to spread,” wrote Monsignor Henrique Augusto Ribeiro, pastor at Five Wounds Portuguese National Parish, in his diary on December 18, 1918.

Born in the Azores Islands, Monsignor Ribeiro came to the United States in 1912 at age 46 without knowing any English. Within a year, he had established himself in San José and was working to build a new parish.

In November 1913, the land was purchased to build the church. On Nov. 8, 1914, the Parish of the Five Wounds — Quinque Vulnerum, in Latin — was established by San Francisco Archbishop Patrick Riordan at the request of more than 300 Portuguese families. However, soon after the first Mass was celebrated at the newly built church, the 1918 flu pandemic was already widespread.

“All meetings are forbidden in this city because of the influenza,” he wrote on Oct. 11, 1918, and five days later, “The influenza continues to spread. Germany is all but beaten; nothing can save her now (in reference to the eventual defeat of Germany by the Allies in World War I).” “Influenza Epidemic Rages with Unequaled Fury throughout the City,” headlined the San Jose Mercury Herald on Oct. 22, with several articles asking citizens to wear masks.

“In 24 hours, more than 2,000 people became ill in San Francisco; people came to Mass wearing masks,” Monsignor Ribeiro wrote on Oct. 26. Between October and November, there were 87 deaths and 2,112 influenza cases in San José and 11,884 deaths in California.

Even during the pandemic, progress was being made in the new church. The main altar arrived from Oakland on Nov. 26, followed by the blessing of the Holy Sacrament two days later.

The church was scheduled to be dedicated on Dec. 1, 1918. However, Archbishop Edward J. Hanna couldn’t attend, possibly because of the ongoing pandemic. It was decided to postpone the dedication to the following year, and was ultimately held on July 13, 1919, with Archbishop Hanna presiding with thousands in attendance.

While Christians were instructed to stay away from Christmas gatherings, the ban was lifted on Christmas Eve in San José, giving churches little time to prepare any celebrations. The church bells were hoisted to the towers, and “when the bells rang, people cried with happiness,” Monsignor Ribeiro wrote in his diary.

Five Wounds Parish celebrated its centennial in November 2014 and the centennial of the church’s dedication in July 2019 under its current pastor, Father António Silveira. Over 100 years later, Five Wounds and all parishes had to adapt to another pandemic when Santa Clara County shut down in March 2020 due to the COVID-19 pandemic. The church started livestreaming daily Masses, attracting thousands of viewers each week.